'I told you he couldn't tell she was made of plastic...' (Buried Treasure) 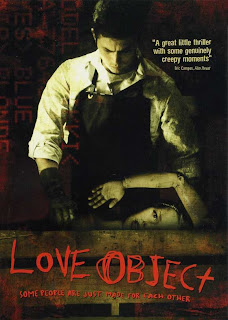 Yeah, that's pretty much the opener for the extremely hard to classify into a genre film called Love Object. I guess if I had to call it something, I'd call it a dark drama/horror/romance/dark comedy. Sounds kind of strange doesn't it? Well, try and keep up with me.

It's the story about a regular working stiff named Kenneth who works for a company that publishes those little instruction manuals that you always throw away as soon as you purchase whatever. He's sexually awkward and almost ludicrously awkward around women at the start of the film, which is when he learns about a company which sells extremely lifelike sex dolls named Nikkis. He purchases one, for 10 grand, and morphs it to look like his new co-worker Lisa.

As you can probably guess he has a good amount of not school appropriate fun with his new lifeless companion but he also has some sweet moments with the thing, like when they watch the English Patient together or when he teaches himself how to waltz by using the love doll. (And some kinky equipment...) But as he's doing all this, his love life begins to blossom with Lisa and he begins to notice that Nikki is getting jealous, that's right kiddos, Nikki is not as lifeless as she appears.

That's all I'm going to tell you about the plot, any more would spoil it, but I will tell you this, the first hour is absolutely wonderful. It's a sweet offbeat, and oddly touching, romance about an awkward man, his sexy co-worker, and his love doll. (I know that sounds anti-touching but stay with me) I've always been a fan of strange romance movies from Edward Scissorhands to The Dead Girl. (Yes, I liked that movie) However this movie resembles neither, it's more of a Makeout with Violence type romance, bittersweet and yet misunderstood. (And for any of you who have had the privelage of seeing that terrific movie, props goes to you, I'm still awaiting the DVD release, if it gets one.) Just watching the first hour of the movie made me say 'Awwww...' a couple of times, I mean it just has some parts that are really the sweet.

But I also have to add that the movie is an hour and a half long, so what about the last half an hour? That's the part that, although it didn't ruin the movie, it made me drop my rating of it. The movie transforms itself, very abruptly and somewhat unrealisticly, from a disturbing romance into an almost Saw-like horror/torture film. So if you're queasy you might just want to watch the first hour and then stop, it's a wonderful first hour, and the ending isn't bad but it somehow doesn't feel right to me. I'm sure some will like it, and I know I got a bit of a chuckle out of it, but I also think a lot of people will be turned off, like I almost was.

All in all though, it's a terrific movie that's well-above average and well-worth checking out. It's kind of hard to find, hence the buried treasure status, but if you do manage to find it, it's relatively cheap since it's now over 5 years old. (My copy was less that $10 new) But if you like strange romances or watching movies about fetishes, like The Dead Girl, check this one out. If nothing else, it's something good to have your girlfriend watch. 'Honey, you will not believe the great romance movie I got, you'll love it. Just love it...'

Although I think your girlfriend might be a little creeped out ... unless she's cool.

Anyway 7.5 out of 10 (It was on the road to getting a 10 out of 10 but the ending really knocked it off track, like I said though, the ending doesn't ruin it but it certainly doesn't make it better or even stay at the same level.)
Posted by FALLEN101 at 5:15 PM No comments: 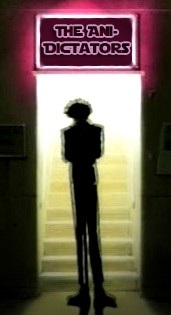